Abbey, my Cardigan Welsh Corgi, was lost at the end of January, and was found safe ten days later. Anne at Dogs Finding Dogs played a major role in this success, even though all of Anne’s input was guidance by phone. She was extremely accommodating to my anxious calls with her knowledge and experience of searching for lost pets. Abbey had just been transported from CA to VA two weeks earlier. She escaped from our fenced backyard into a woodsy area near our townhouse. By the time we encountered Abbey she was in a panic state and fled in blind fear, disappearing over a hill and into a highway median. Distributing flyers (for sightings) and Anne’s guidance on a lost dog’s behavior kept me close to my Abbey for seven days. Anne’s last advice to me on the evening before a record-breaking snow storm was that this storm could be a big help since it would limit Abbey’s mobility. Anne said that Abbey may hide under a deck or come to someone’s back door exactly what occurred the very next day. Abbey was too short to hop in 30 inches of snow and found a low backdoor deck at the townhouse complex we had tracked her to the day before. We got Abbey back after a Find Toto alert resulted in the phone call telling us exactly where she was. Thank you Anne. Your guidance was priceless. 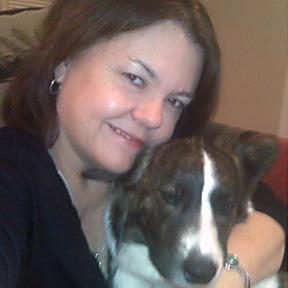