Abby, my seven year old beagle escaped my fenced backyard late in the evening. We posted hundred of flyers in our development and nearby neighborhoods and convenience stores, we posted ads in newspapers and online lost dog sites, searching on foot and in the car morning and night provided no luck. The weather was not cooperating with snow, rain and ice and temperatures in the teens. We came across a website Dogs Finding Dogs and called the number listed and spoke to Anne who was very helpful and reassuring. She contacted Kayla, one of their dog trackers, who got in touch with us that night and arrangements were made for her to come out the next day. Kayla and Ashleigh, along with their dog Walker, an American Foxhound arrived at our home a week after Abby had escaped. After a four hour search we did not locate her, but it was very encouraging to see the exact path that Abby took, and how her paw prints led to several streams where the team was able to tell that Abby was drinking from the streams. They also helped us pin down the most current area where Abby last traveled. Feeding stations were set up in these areas with hopes of Abby returning. With the help of Dogs Finding Dogs, we were able to expand our flyers to other areas and gain more hope that Abby would be found. We are happy to report that Abby was found four days later. Kayla , Ashleigh and Walker were right on target with Abby’s paw prints being four days old. Thank you Kayla, Ashleigh and Walker for all your help and support! Hopefully I will never have to use your service again, but if another situation should occur, Dogs Finding Dogs would be the people we would call. 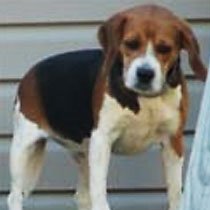