Anastasia is an beautiful American Eskimo dog that was believed stolen during a home robbery. Anne Arundel County police called K9 Heidi out to try to track for her. With police in hand she tracked the dogs path around the apartment development to where the dog’s scent vanished as in a pick up. From the tracking, the police knew that the dog was not stolen. The same day Dogs Finding Dogs went searching its connections and found who had picked up the dog. And it was put into a car EXACTLY where Heidi indicated. However, this person gave the dog away and it was subsequently lost again but luckily found by DFD and the AA County police at a shelter. The AA  County police oversaw the dog getting back to its owner. In appreciation, the police along with the AA County Executive, awarded K9 Heidi and Anne a Executive Order of Appreciation for a job well done! 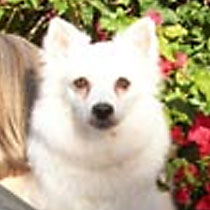