Congratulations to Christine and Atticus for a safe return home!

Special thanks to K9 Riley and Felicia for all their hard work!  K9 Riley indicated where Atticus was hanging out.

Atticus is a two and a half year old indoor kitty. Christine and her family were moving. Atticus was staying at her parents house. He got out while we had the door open too long. The morning after he went missing Christine’s parents spotted him about 100-200 feet from the house, but couldn’t catch him. DFD set up a plan of action to follow and it took a week but it worked!

From Christine:
He’s skinny, sleepy, and hungry but he’s home! Atticus was caught in a trap sometime between last night about 8 and this morning before 7:15! (My mom called me as I was pulling into work!). Thank you soooooo much for your help!!!!!!! Thank you all so much!!! I’ve definitely recommended the group to our own local rescues and to people I know around here!! 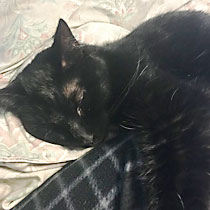