Barley is one heck of a fighter. He slipped outside on Halloween night and must have gotten lost in the veritable wilderness behind our home. After two weeks of pretty horrible weather he must have had enough of the outside life and went to the neighbor two houses down from ours and meowed his way inside. Luckily the neighbor had seen a flyer we’d place in her mailbox and called us right away. However, if it wasn’t for Dogs Finding Dogs we would have never tracked Barley to the neighbor’s house in the first place. Also we would have never found out that the neighbors had seen Barley several times during his adventures while we hadn’t seen him even once. 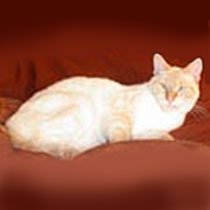