On January 21, Bella left her yard in Olney, Maryland looking for her owner. She went to the neighbor’s house thinking she might find him. On that walk, only two houses away, she got way off course!

For the next two weeks, she was sighted as far northwest as Glenwood and as far southeast as Burtonsville. Tim and K9 Jake from Dogs Finding Dogs tracked her on January 28th. They checked four spots that day where she had been sighted in that one week span. Jake picked up the heaviest scent in the Highland, MD area where she was sighted on the 26th.

The action plan was to set up feeding stations, putting up fliers where she had been sighted, and social media postings. Every day after the track, Ray had a sighting and he would head to those areas to lay scent and hope to get in front of her path. Finally, on February 2, a woman in Dayton, MD spotted her. She called Ray and kept an eye on her from a distance. Once he arrived with his son, they were able to corner her.

Ray used the guidance from Dogs Finding Dogs and got down on the ground and trying to get her out of flight mode. Once Bella realized it was Ray, she was ecstatic!  It was a storybook reunion! 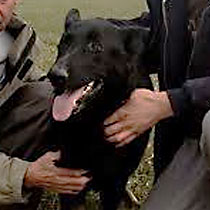