The day we moved to our new home, amidst all the confusion and even having one of my other kitties ride in the moving truck since he was all the way in the back of the packed truck and we could not get to him, Bentley slipped outside. When I realized Bentley was nowhere to be found, I went searching for him. No luck. I put up posters and listed him on Craigslist. That’s when Anne called me. She suggested many things to me to help me find Bentley, which I tried. A lady called me and said she had seen Bentley in her back yard. He eats with her cats who stay outside. Now we only had to catch him. Anne and Heidi came out last night. We went to this lady’s house. While we were searching for Bentley, I happened to look over down a long grass way that has trees on either side of it. There was Bentley–I walked really fast and called his name, but he ran away. Heidi tracked him down into a patch of pine trees…literally right up to Bentley’s nose when she indicated she had found him! Unfortunately he ran off and we couldn’t catch him. I found an old abandoned trap and put it just inside the pine trees, put out some food inside and left. I came back the next day…wondering if I had caught anything…and there was Ben-Ben inside of it!!!

My thanks go out to Anne and Heidi again. I also want to thank the family to whom Walker was a part of… Anne says you guys made a significant donation to Dogs Finding Dogs for people like me who are strapped for money and still need help finding their lost pets. My condolences go out to you. Walker is okay now, though…he crossed over the Rainbow Bridge and is now a doggie angel…where he can run and track all he wants, to his hearts content! 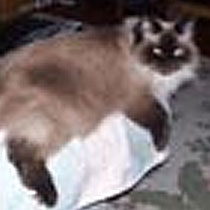