On an otherwise average weekday afternoon, Blue wandered out of the back yard through a bit of broken fence. I’m not sure how long she was gone before I realized she was missing, as she likes to hang out on the back deck and I didn’t know that the fence was broken. Once I knew she was missing, I immediately called Dogs Finding Dogs and spoke to Mary.  She talked me through what to do until she could get there with Lessa. Then Mary arrived with Lessa. Lessa has been to our house before and knows Blue and at first, she was just sort of happy to be there. Then Mary put on her vest and you could see it like a switch how fast she got into working mode. We gave her a towel to sniff and off she went. Now, I’ve seen Lessa track in practice. She’s even tracked me in practice. And it’s cool and all, but I always thought, yeah, but in the real world? Really? And the answer is, “Really!”  Absolutely. It’s amazing. It’s like she was following a neon spray painted line in the grass. We got about three blocks away and Lessa started nosing around in someone’s driveway. Naturally the woman came out, but unfortunately she didn’t speak any English – or Spanish or French – and she went inside before I could show her the picture on my phone of Blue which I’d been showing to everybody. We had gotten about two houses down when the woman came back out and called to us. When we returned she handed me a cell phone and said “English.” The man on the phone explained that his sister had the dog and was waiting for him to get home from work to call the number on the tag because he was the only one who could speak to me. We went back to the house, she opened the front door, I called, and Blue came bounding out. It was at most 20 minutes from when Lessa arrived to when Blue was in my arms. It was such a relief!  I’m glad that I knew exactly who to call when I found myself in need. 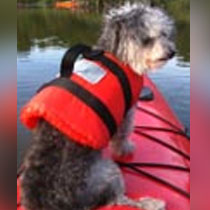