Congratulations to Carolyn and Bo for a safe and fast return home!

Special thanks to K9 Jake for his hard work on the case.

Bo, we believe, was stolen out of his yard in Dundalk. The gate was opened and the other two dogs that Bo lives with were still running nearby in the neighborhood. They were all caught.  The tracking dog did not find any scent of Bo outside of his home. This was a red flag that indicated theft was likely.

There was a possible sighting five miles away in the marsh area underneath the Curtis Bay drawbridge. We went out there and tracked that and found that Bo’s scent was all over the place. As the owners were getting ready to set up feeding stations, Bo popped out! Still in flight mode, Bo wouldn’t come to his famliy until they laid down on the ground and waited him out. After about an hour, Bo worked up the courage up to come over to them. Yeah!!!!

We came to the conclusion that Bo was stolen, and when the thieves saw that he was a older dog, they dumped him.  We are thankful for a happy ending for all. 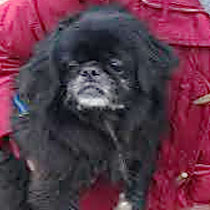