Boh was adopted from BARCS and we lost him as we were getting him out of the car in the driveway. Dogs Finding Dogs came out with Heidi to locate him. They located Boh at the Turf Valley Country Club Golf Course. It took the efforts of Dogs Finding Dogs (DFD), Baltimore Animal Rescue and Care Shelter (BARCS), and Mid-Atlantic German Shepherd Rescue (MAGSR), and the Pitbull Rescue to track and trap him. Thank you to all the rescues for the use of the traps. It took just over a week of keeping an eye on Boh and playing musical traps to finally get him. He is home safe and sound now with his new sister and settling in.

– Elisabeth and Rob in Woodstock, MD 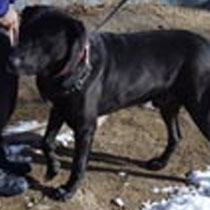