I had lost my dear friend. I felt defeated, and had given up the search for my cat, Buddy. Anne Wills of Dogs Finding Dogs responded to my ad. Anne sent Lynn to my house with her companion, Mabel. Mabel was not like any other dog I had ever met. She seemed focused and professional and eager to get to work (a description I had never been able to pin to any dog I had met). I gave Lynn a brush I had used on my kitty so Mabel could establish a target to sniff for. Mabel sniffed the brush only briefly, and Lynn said to her, “Find the cat.” A couple of days earlier, one of my neighbors said he saw my kitty laying in the sun in the grass in back of the house. The spot he had pointed to was exactly the first spot Mabel went to! Though I had put all my eggs in the Dogs Finding Dogs basket; I was still a little skeptical. After about two minutes with Mabel, I felt 99% sure that she would find my kitty. After the search, Lynn expressed that she was rather confident that Buddy was still in the immediate area and that it would take some simple coaxing to get him to come home. That night, I decided to go outside and try one of the techniques Lynn had suggested. She said to take a big flashlight and shine it into the woods, so the light would reflect off of his eyes. I had only a small flashlight, and I shined it into the woods where I briefly saw a flicker of reflecting eyes. I maneuvered the flashlight to shine it at a different angle, and I saw the eyes again! I called him. “Is that my Buddy? Come here Buddy.” “Meow!” It was him! Even though the emotions and thankfulness cannot be sufficiently expressed by mere words, I extend my deepest gratitude to Mabel, Lynn, Anne and all of the people and animals who make Dogs Finding Dogs possible. You have helped me, and you have most likely saved the life of my harmless, innocent kitty. Thank You So Much! 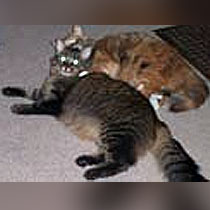