On the day before my wedding, Buster scooted out the front door wearing no collar. Flyers were put up everywhere we could think of, ads were placed in the paper, and Find Toto sent out an alert. We began running out of ideas, then someone at the vet’s office mentioned using tracking dogs to find lost pets. A Google search led us to Dogs Finding Dogs. I contacted Dogs Finding Dogs and at Anne’s suggestion, we placed things that smelled of Buster in a plastic bag and sealed it shut in case we had a tracking team come out. Then, two weeks after he was missing, I was driving down a side street and caught a glimpse of him on the other side of the road. I gave Anne a call and she said that she would have a team out the next morning. Lee and Janel came out on Saturday morning and we started from the last place he was seen. Lee spent a few seconds sniffing Buster’s things and was off. After walking down streets, through wooded areas and back yards, we established the path that Buster was likely taking. Though the various locations didn’t seem close to each other when driving, but by looking at a map it was obvious that all these locations were relatively close. We placed feeding stations and a trap along the path. On Monday morning, I received a call from someone who lives on the next block, and saw our sign. They said they were looking out their door at Buster and knew not to go running after him. My Mom arrived and just sat on the ground as Anne and Janel previously had suggested we do. She did not approach, instead just letting him smell and get comfortable. Mom said that after a few minutes, Buster just started walking toward her. She gently reached over and picked him up, at which point his little tail started wagging. Words cannot express the gratitude we have for all of the help and words of encouragement Anne and Janel at Dogs Finding Dogs provided. 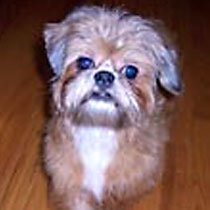