Opal was a birthday gift but I never got to even touch her before she escaped from her crate in the middle of the BWI Sheraton Hotel. We chased her and did everything possible to try to catch little Opal but she was too quick and too scared. She had just been flown in from Oregon from her breeder.

We placed a cry for help out on the web and Dogs Finding Dogs came to the rescue. Anne and K9 Heidi showed up at the Sheraton and helped track Opal. Opal’s footsteps were like spaghetti! Up and down, all around and no wonder…..we had chased the poor little dog all over! Heidi tracked her perfectly and then lead us off of the property of the Hotel, across 195 and to a hole in the fence of the airport runways! This is where the airport stepped in and said they would take over. They would not allow Anne and Heidi on the property because they were considered to be a security risk.

Anne spoke to the head of operations at the Airport, BWI, and was told that if USDA could not catch Opal by the next morning than they would resort to shooting her with live ammo!!!! They had had enough of her running on all active runways, in front of planes and baggage carriers!!

By a miracle bigger than life, Opal was caught the next morning. WBAL 11 news was on the phone with Anne as they were in the air coming to Opal’s rescue!! We love Dogs Finding Dogs and all the help that they gave to us! And K9 Heidi is about the smartest dog on this earth. She knew just who Opal was. For now, Opal gets eggs and bacon every morning and she is adjusting to me being her new mom! 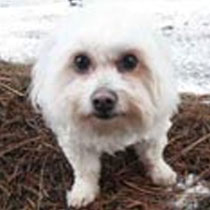