We rescued Charlie from an animal shelter 4 ½ years ago, and now he’s a real part of our family! On December 18th, the kitchen door blew open and Charlie escaped – the day before an enormous blizzard! He’s very timid, and since we’ve had him, he’s never been outside. We searched for him as much as we could, before all of Baltimore was covered with almost two feet of snow. After Charlie had been gone for more than a week, we were really losing hope. A shelter suggested that I post a lost-and-found ad on Craigslist and, thankfully, Dogs Finding Dogs contacted us after seeing the ad! Anne brought her dogs over to track for Charlie, helped put up dozens and dozens of posters, followed up on every “Charlie sighting” by placing cat traps… and, very most importantly, never let us give up hope. Weeks went by, and Anne kept saying, “He’s out there, and we’re going to find him!!” Finally one day a neighborhood child thought she saw Charlie running past a nearby garage. We put a trap out where she’d seen him, and the next morning there was Charlie!! He was thin and dirty, but had survived outside for four weeks in extremely cold, snowy, windy weather… and we found him, just as Anne had said! Without Dogs Finding Dogs, we would not have known what to do. It truly seemed that he had completely disappeared, and we would have given up the search weeks earlier. We probably would have lost him forever. We (and Charlie!) are so extremely thankful to Dogs Finding Dogs for getting him back home to us!! 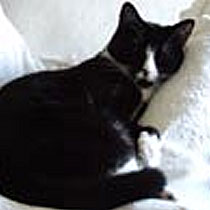