Chester is a son-of-a-gun for causing us so much worry. The story goes like this….Chester slinked around my feet when I went out around 11pm to my back deck. Usually this would not have caused a big problem. This time the back fence was left open. So when I went to bed I never realized Chester would disappear. After 2 days I saw DFD on TV and decided to give it a shot. The search didn’t take very long. Chester was 3 doors down under a deck. But he picked the best deck to hide under. We could not get him out. So per your instructions we set the stage to keep him there long enough for him to peep his head out so we could grab him. The funniest thing is that Chester got caught because instead of hiding from us, he darted out in front of us after a squirrel. Ah ha! Now we got you! And that we did! Chester is back home with his brothers and sisters now, but still yearns for another attempt to ambush the squirrels. Thank you so much for finding him!

– Amanda and Joe in Annapolis, MD 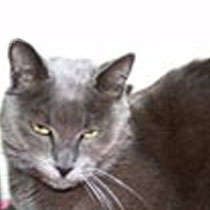