Around 1am on Christmas, I received a phone call from a friend who was pet sitting for both my dogs, that Chloe and Chaz, while my family was on vacation. Chloe somehow escaped under the fence. She ran away when they attempted to catch her. She continued to run and they had no idea where she went. I immediately gathered the kids and returned home on Christmas morning. I called for her and talked with residents in the neighborhood, leaving my phone number with a few. On Saturday, I called Dogs Finding Dogs, who helped with the search and was right when she thought that Chloe was still in that vicinity. Over the first three days I hung flyers, contacted & visited shelters,posted her picture online, and told all friends & family to be on the lookout for her. We also raised a few hundred dollars as a reward just in case. There was not much else to do so we just prayed & waited for an answer. That answer came on Friday morning when I received a call that she had been spotted, thanks to the flyers. The caller was nice enough to keep her in sight until a friend was able to go and call Chloe to safety. Thank God! I offered the reward to the caller but she declined. I don’t know what happened over the seven days that my poodle mix roamed the streets of Baltimore city but I know she had to have an angel with her. Don’t ever give up is my advice to anyone with a missing pet. Thanks again, Anne & Heidi. 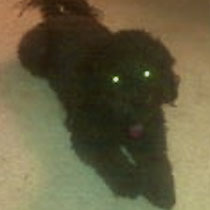