Our cat Chloe had slipped out on Thursday night when my husband opened the front door to walk a friend out. We had no idea she was missing until Friday morning. We didn’t know what to do or where to even being. On Saturday we got in touch with Dogs Finding Dogs who offered to send a tracking team out that afternoon. Dogs Finding Dogs came out in full force to help us look for Chloe. We began sweeping through our townhouse communities. K9 Lee and Janel would take one side of the street and sniff every possible hiding spot while Kayla and Ashley would look with flash lights on the other side of the street. After one hour we had swept through quite a few of the townhouses. I was beginning to think that we were not going to find Chloe. As we were heading back to my house the trackers decided to make one last sweep under the group of decks in my townhouse group. Lee sniffed at the first deck and then when he walked over to the second deck he perked up and was trying to pull Janel under the deck with him. Janel took a look and so did Kayla and there was my Chloe under the deck. With some time and a lot of patience I got Chloe out from the deck and inside. I don’t know if I would have ever found Chloe without the help of this amazing group of people. Thank you again. 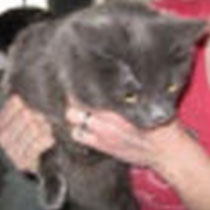