Cinnamin is a 5 month old stunning Pit Bull puppy that slipped her collar when she got scared on a walk! Off she ran and was nowhere to be found. Dogs Finding Dogs came out with Lessa to track Cinnamin. Lessa identified a patch of wooded area and junk yard that Cinnamin had been running in. Later that night, we went out and searched for her and found her running that same area. She would scoot into the surrounding woods whenever she saw us. We could not catch her so we called Dogs Finding Dogs that night and they told us to STOP chasing her and to try to coax her over, to walk away from her and she would follow. And that is exactly what Cinnamin did! She wound up walking exactly behind us to the house we went to. She cried at the door and walked right inside when opened! Amazing! Five days out and not much wrong with her other than hundreds of ticks, which were removed. DFDs good advice and tracking dog helped bring Cinnamin out of the sticks! 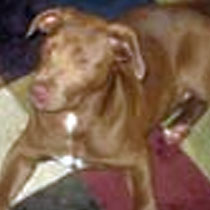