Congratulations to Pat and Cooper for a heavenly scent return home safe and sound!

Thanks to K9 Riley and Felicia.

Cooper is truly blessed and we’re sure there were angels were watching over him.  Cooper went missing, like many cats lately.  There must be a run on cats getting outside!  He disappeared from his home and ultimately was found about two football fields away.

Cooper found a small opening in Saint Augustine Church. The Father called with a sighting and a trap was set. As mass was starting, the nuns heard Coopers cries for help. He was in the trap! Cooper had been missing for nine days.  The Lord was Praised, literally!  What a blessed kitty. Helping little Cooper was truly a treat for the nuns and the priest! God protects our precious pets! 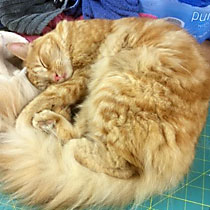