We were away in Ocean City and my son called and said Corkey escaped through loose wire under the fence after being freaked out by fireworks going off in the neighborhood. We came home early the next day and did everything to try to find him. For nearly two weeks, we put signs up and drove around, walked around and received phone calls reporting sightings, we still couldn’t find him. Every day I called Animal Control.  They advised to post a listing on Craigslist, which I did.  Immediately, I got an email from Anne with Dogs Finding Dogs. My daughter called Anne and that evening Kayla and Ashley came over with Walker. They went to the two recent sighting locations, and at the second spot, Walker found Corkey’s scent and discovered where he had been roaming. With Kayla and Ashley’s help, we put more posters up and set up feeding stations. Prior to DFD coming down, we had lost hope and were sure that Corkey was gone for good. However, with their help, knowledge and persistence we knew from the feeding stations that Corkey was in the woods. Our hope was restored, and we followed their instructions, inspired by their commitment to find Corkey. After almost six weeks, we received an anonymous message from a person who saw our posters featuring Corkey’s picture and explaining that they thought their neighbor might have had Corkey for a couple of weeks, with no intention of calling us.  They left the location, and we went to the address, I knocked on the door and guess what, Corkey came running to the door barking. Big thanks to Kayla, Ashley, Kim and Walker for their love of animals and commitment to bring them home!  We would have given up the search weeks ago. There are not words that can express how much we appreciate all of their help in bringing Corky back home. Love you guys and bonus, we’ve made new friends for life!!! 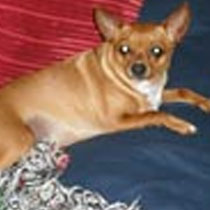