The Memorial Fund for Charlotte Perry, in the name of her dog Cricket, has been set up in conjunction with members of the National Capital Area Great Pyrenees Club to honor Charlotte’s memory. Every donation helps Dogs Finding Dogs offset the cost of reuniting missing pets with owners who cannot afford to make a donation.

Dogs Finding Dogs extends our deepest sympathies to Mr. Jack Perry and family for the loss of a beautiful, kind and wonderful woman, Charlotte Perry. Mr. and Mrs. Perry were involved in a fatal car accident while coming home from a dog show that featured their Great Pyrenees, Cricket. Tragically, Mrs. Perry  was killed in the accident.

Cricket was thrown from the van and escaped from her crate at the accident site. Dogs Finding Dogs along with Mr. Perry and his family, friends and the local news stations led a search for Cricket which started in the evening, two days after the accident. The public support from loving strangers for Mr. Perry was overwhelming.

DFD took its most senior search dog, Heidi, out to search for Cricket. With media in tow, friends and family of Mr. Perry, we all followed behind the search dog. Without going into a book’s worth of details, Cricket was running along a wooded power line nearby the crash site. Cricket answered by barking back to Mr. Perry’s grandaughters’ cries for her. Cricket was showing us where she was. The trick was catching up to her in all the four feet tall massive field of weeds.

After three hours of searching, Cricket was finally caught by the side of a road.

Mr. Perry, whom had just been released from the hospital, sat in the back of his family’s van all night waiting for us to find his precious dog. It was with the GREATEST pleasure that Cricket was reunited with him at approximately 10pm. This special reunion was all due to the determination of those working hard to find Cricket for Mr. Perry. While this is the saddest case we have ever had, there is still a small happiness that we could bring Cricket  back to a wonderful man who had just lost his wife. He needed Cricket’s help to go on with his life.

For myself, I have never cried so much with any case as with this one. Before I started tracking with Heidi, Mr. Perry’s family asked me to come to the van for a minute. I walked with them as they told me that their father wanted to talk to me. As the van door opened, there was Mr. Perry sitting there. He grabbed my hand and pleaded that we find Cricket. With tears coming down my cheeks, I said to him “Mr. Perry, I am so, so sorry for your loss. I GUARANTEE that we will find Cricket!  You have my word sir!  We will get her back to you.”

I am deeply thankful, that by the Grace of God and the hard work of many wonderful people, Cricket was back in Mr. Perry’s arms that night. 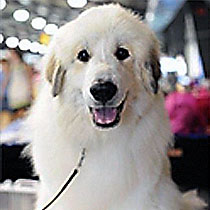