In January, I accidentally let out of our house an Italian greyhound that we were watching. It was 8 am and the temperature was 25 degrees. Dante the dog was discovered to be missing at 11 am. We called the MDSPCA and asked if they knew a dog tracker. They suggested Anne with Dogs Finding Dogs. We thought that Dante would only last 20 minutes in the cold but we were wrong, Dante was picked up by a stranger running across the street at 11 pm. The first day ended at a backyard about 1 mile from our house. The next day we had a witness of Dante at a local supermarket the previous night. So we went with Anne and Heidi to the supermarket and Heidi started tracking. Heidi went down the street, turned left to the next street, made another left and went all the way up the block to the intersection of a main road, Harford Road and then the scent went cold. We also had a witness of Dante running with another dog toward Harford Road. This we learned after Heidi did her work. Later that night, a vet called and said that they had the dog (microchip). The story we got from the vet was as follows. At 11 pm the previous night a man was driving south on Harford Road and braked to avoid hitting the dog. He got out and chased the dog down and took him home for the night. The next day he took the dog to his vet. In summary, Heidi and Anne were able to trace Dante to the exact spot where he was picked up and put into a car. We really appreciated their work and would highly recommend their services. 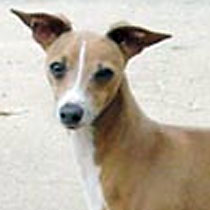