This week I found out what it truly feels like to lose (in my case literally) the love of your life.  My terrier, Dexter, decided one day that he felt like running off and hopped the fence around my parents’ back yard and tore off into the woods. A Google search led me to Find Toto.  I immediately jumped on the opportunity to list Dexter as missing. I also came across a group called Dogs Finding Dogs. I gave them a call and spoke to a wonderful person named Anne who turned out to be my saving grace. In addition to plastering the neighborhood with lost posters, she recommended laying a trail of treats from where Dexter was last seen back to the house and also leaving some of Dexter’s possessions on the front porch so he could smell them. She also recommended walking the path as much as possible to lay your own scent for the dog. But the most important thing she provided was encouragement and hope that he would be found. We walked in the woods for 12 hours walking back and forth calling his name, squeaking his red ball and even dropping dirty socks along the way so he could smell us. Nothing. At one point we thought we saw him about a quarter mile away, but we were too far to catch up, and by the time we got there he was gone. Then around 10 that night I thought I heard whining coming from the back yard. It was Dexter! 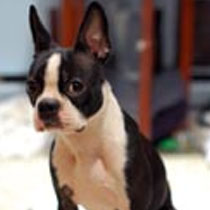