Dutch is a Labrador mix who wound up running a total of 60 miles before he was caught! He ran across state lines from Frederick, Maryland to Pennsylvania. His poor little feet were sore and he had begun to limp! He had only been with us for a week and the front door blew open and out he ran! Dogs Finding Dogs came out to track immediately when he went missing and could show us a direction of travel. We then had posters, flyers and a newspaper article hit the streets in the general location. Sightings came in and we saw that Dutch was hanging around a industrial park and train tracks. Dogs Finding Dogs brought two search dogs out to try to cover the area, but still no sign of Dutch.  He had started running along the train tracks!  We followed the possible path, confirmed with sightings into Thurmont, PA, and then converged on that area. Dutch just kept running the tracks until he got into PA where he adopted a house to hang around for several days. We then took Dutch’s original owner up to the house and she called his name and he came running over to her like nothing had every happened and jumped into the car.  We are so thankful that our story had a happy ending! Dogs Finding Dogs helped with advice, tracking and anything that was needed. After his 60 mile hike, Dutch is ready to take a nice long nap! 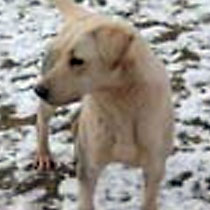