One evening, Nemo, an eight inch tortoise decided to crawl out of the doggy door while his owners were sleeping on the couch. He then managed to fall off of a 6′ high deck, land right side up and off he went exploring! Unbelievable? Maybe, but it gets better!  Nemo managed to cross the street, go up three houses, into backyards and thru a small wooded patch that the neighbors all shared.

Having been gone for several days, we called Dogs Finding Dogs to come out to look for Nemo. At first, we thought this could be a friend pulling a joke on us! A tortoise thru a doggy door and off a deck… really?  To make matters worse, it was pouring down rain when we arrived. The dog scented up on some dirt from Nemo’s cage and off she went fully excited to track something different. Lo and behold, within a half hour and in the pouring rain, Nemo’s hiding spot under a bush was found. Nemo sure gave the search dog a good race! 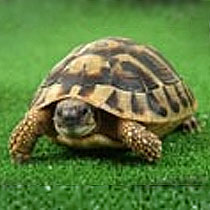