Frankie, a little small Dachshund, ran out of the fence in his all country area of Del Marva Md. He was first tracked by Janel and Lee. His path was quite large because he had been out for several days. His footprints were also found. Trying to find a little dog in the sticker bushes and woods was very hard. Traps were set as well as scent paths. After another few days and only signs of food being eaten and cats being caught in some traps, Anne and Heidi drove down from Baltimore to track again for Frankie. It was a miracle! Heidi’s nose was only to the ground for less than 5 minutes and we had Frankie back. Heidi was scented up at a recent siting and followed Frankie’s path along with all his family members. Frankie was quickly found stranded on downed logs in a swamp. Frankie was screaming in terror, shaking with the cold and had scratches all over. Heidi’s herding instinct kicked in and she held Frankie from running away from us. Frankie got off of the logs and was still trying to avoid us. Finally Frankie’s family member was able to reach down into the water and scoop him out. We have never seen such a JOYFUL reunion! Tears were in everyone’s eyes! and Heidi was jumping for joy! 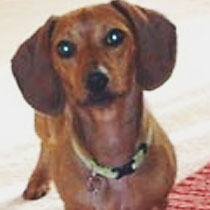