Welcome home,Freddy! Freddy is a curious Beagle who loves the outdoors. Freddy was adopted from a co-worker who used to let Freddy run his huge property, hunting for rabbits. When I got Freddy, he only had a fenced in yard that limited where he could roam. Freddy found an escape route one day when he broke free from his tie down. With 25′ of line dragging behind him, he ran away. Dogs Finding Dogs came out with Heidi and we tracked Freddy into nearby woods, and then into a neighborhood nearby. Freddy was running all around with his line still attached!. We laid deliberate trails of food and scent articles from our family and dogs to help Freddy stay in the area and find his way back home. That is exactly what Freddy did. We received sightings of Freddy right where the track had shown us.  When  the kids got home from school, Freddy was sitting at the front door!  We are glad for the help and for getting him back home. 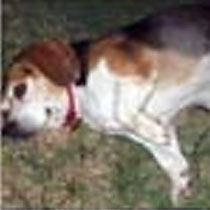