Congratulations to Mary, Tim and Gabby for a safe return home just in time for Santa!

Special thanks to K9 Riley for finding her hiding spot.

Gabby had been missing for just about a month. Thankfully, she didn’t go far!  She was just around the back of the house and under a deck, and coming out and prowling around at night.  She’s a little thin but otherwise healthy.

Gabrielle is HOME! Today right when it was getting dark Tim went over to her hiding spot under the deck . The trap was near there and unfortunately the mechanism had been pulled (so it wasn’t open) and the flyer about Gabrielle had been removed. So that would have needed to be reset. But THANKFULLY we didn’t need that because Tim sat right at the entrance to the deck with an open can of tuna and talked to her softly and then he heard her breathing and she came out. He carried her home and she didn’t resist at all. She’s run around to some of her favorite spots, had some food, and now she’s resting. She’s been meowing a lot and will probably need reassurance.

Thank you so much! 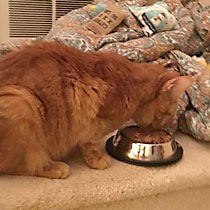