Homer takes the cake! While my boyfriend was pet-sitting Homer at his home, he was taken on a walk into unfamiliar territory. Poor Homer is a rescue Beagle/Basset mix and was severely abused. He got scared on his walk and pulled out of his harness and took off. I was in Canada and called Dogs Finding Dogs to ask for help. I cut my trip short and rushed back home to Virginia. Two dog searches were performed over a three day span looking for Homer. Posters, flyers and door to door knocking were carried out. Homer’s track was found and he was in the wooded area, dense with thorns!  After laying a scent track from the woods back to my boyfriend’s house several times, Homer was able to make it home the very early the next morning. Homer was full of thorns and mud, had lost about six pounds and was very tired.   Homer was very happy to be back home with his owner! 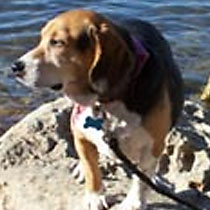