Congratulations to Stacy and Richard and their newly adopted little MinPin, Houdini, who is now home safe thanks to the DFD Found by Phone Hotline!!

Special thanks to Sherry for overseeing this Found by Phone case.

This little cutie is a rescue dog that escaped after they had her for two hours. He escaped wearing a retractable leash on December 8.  On December 11, he gave up at a dry cleaners store. The dry cleaners caught him inside but he escaped out the door again.

We moved the trap to that area and he returned again on December 12. Stacy could not lure him over to her so she baited the trap up again with some delicious treats. He entered the trap a little after midnight on the December 13.

They are now calling him Houdini!! 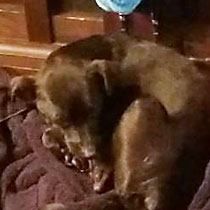