Iko found in under 5 minutes!!!!! Absolutely unbelievable!!!! Thank you so so much! Iko is a rescue Australian Shepherd who is my constant companion who comes to work with me every day. Iko has full run of my shop and outside of it as well. He has a routine of running around the back of the building, then up on the railroad tracks and then back again. He never leaves my side, so when he disappeared at 10:00 a.m. and didn’t return after a few minutes I knew that he had to be being held against his will. While talking to another fellow Australian Shepherd owner who lost his dog, I was told that Dogs Finding Dogs was there to help him as well. I called them and the next day they came out and found my best friend in under 5 minutes! The dog tracked Iko’s most current path and went onto the tracks then off again into a nearby neighborhood and straight to a house. At that point I knocked on the door and they had Iko in the basement. I got Iko back and am so relieved! Use Dogs Finding Dogs if you ever lose a pet. This service is amazing. 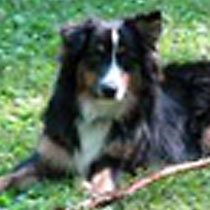