Queen Isabella is our downstairs/living room kitty. She is very special because she was brought home from work as a stray. Changing jobs and leaving her behind was not an option. Isabella got out from the front door and vanished. Dogs Finding Dogs contacted us after seeing a posting for Bella. We had them come over and Heidi sniffed Isabella’s footprints which led to a neighbors HUGE deck, with in ground pool built into it and a very nice screened pool house. WOW! Bella has class! Isabella was found instantly but we could not get under the deck to get her and there were too many big openings to be able to block them off. So we tried traps. In the course of it, we caught kitties that were partying with her under there. It came to be that Bella had made five new friends! Now that Isabella is back home she still wants to dart the door. But now, she is not just a living room kitty, but a bedroom kitty, a kitchen kitty and much more! She truly is the queen and having her back home is priceless. 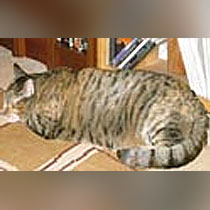