Jack ran after a deer when we took him to go play with his ball in a commercial site that is under development. We looked all over for him and were told that he was waiting for us to come back and sitting on the corner patiently. Every time we drove back by that day he was not there. We were missing him by minutes. He would get up and wander around. Two Policemen and a construction worker tried to get him into the car. He wouldn’t go! We finally got so worried after two days that we needed to know if he was still there. We had Dogs Finding Dogs come out and they were able to tell us exactly where he had wandered and was picked up. They also gave us all the instructions on where to list him as lost. The same day they came out we got Jack back. A nice little lady who was not afraid of this big Doberman put him in her car and called the shelter. They in turn called us and Jack was back! It was amazing that the dog pinpointed the exact spot he was put in the car. 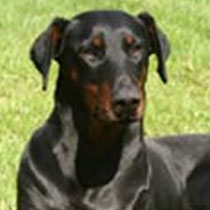