Jasper a 2 1/2 yr. Golden Retriever was rescued by Dogs Finding Dogs and Farmer Bob and his wife Pattie Anne. DFD was retrieving a dog from a cow pastured farm for another one of its clients. This client swore that Jasper was her dog Prince. DFD, not ever seeing the dog at the farm, took this woman’s word for it. To make a long story short, after almost 2 weeks, Jasper was caught instead with a very dramatic ending. Farmer Bob and Pattie Anne helped catch the dog by feeding him when he would come out of the woods. Bob won the dog over one morning. When it was discovered that the dog was not Prince, he was turned over to Animal Control.

Because the dog had been micro-chipped, his true owners were contacted that very same day! Here is the big twist: Jasper had been severely wounded. The puncture became so infected that a local vet said he needed his leg removed but only had a 10% chance of surviving! Jasper’s owners made the tough decision to put him to sleep. With their kids heartbroken, the family tried to heal from this loss. Now, the vet takes Jasper after the owners leave and stitched him up and he was as good as new! Then, Jasper escapes from the vet and runs away. Not wanting to get in trouble, the vet NEVER posted him as being gone!!

So, lo and behold, Jasper winds up right in our hands. When the owners were called to say that Animal Control had Jasper they thought it was a cruel joke! Sure enough Jasper came back home and had escaped his death sentence!!! The children are amazed and thrilled to have him back! They just can’t seem to understand how his leg got sown back on and why he is still with us on earth! The picture is of Jasper and Farmer Bob holding him, Jasper’s owners and their children at the reunion party that we had! MIRACLES do happen and this is nothing shy of divine intervention! Hurray for JASPER who now is called CASPER! Life is great! You never know how things will turn out! 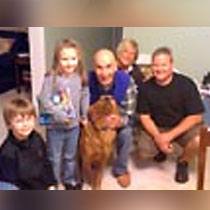