On Sunday, I realized our Boston Terrier, Jeter had gotten out of the house. We had a few sightings but nothing solid. On Tuesday, I stopped by Best Friends Fur Ever who told me about Dogs Finding Dogs. They came over to my house and gave me information and helpful tips to help get Jeter back. The next day we had Walker come out to track him. Walker picked up the scent from where I believe Jeter had gotten out then he followed his scent to places that Jeter had been. It was a very rough Thursday, Friday and Saturday, but I was always in contact with Kim, Kayla and Ashleigh. Anytime I had received a sighting that seemed legitimate, they would bring Walker out. Sunday morning, my husband went to put the poster board up and someone said he knew where Jeter was. Come to find out, Jeter was with someone in PA from Tuesday to Saturday. My husband was taken to the location of the person who had him and they gave him back. Jeter is back where he belongs because of the flyers, posters and dedication provided by Dogs Finding Dogs . Walker gave us a sense of direction as to Jeter’s original whereabouts and worked hard with the little scent Jeter had left behind. In the end, it was the pure dedication that Kim, Kayla and Ashleigh provided. They were just as determined to get my dog back as I was. They were always there to reassure me that I would get him back and their actions proved to be right. I am forever grateful to this wonderful group and HIGHLY recommend them to anyone who has lost their dogs.

– Maggie and Gary in Edgewood, MD 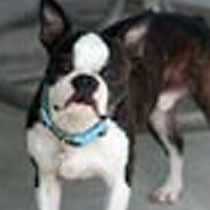