We called Dogs Finding Dogs the first night that Jingles climbed over the fence by way of the piled up snow from the blizzard. We knew DFD because of other dogs we lost in the past. Dogs Finding Dogs came out the very next morning. I was pleased when they answered the phone at 11 o’clock at night and took the time to help us. When they came out we found that Jingles had been getting in and out of the yard for a few days. There were quite a few tracks of his in the snow, some older some new. We found that Jingles had been under a trailer sleeping. He then ran thru the neighborhood where he was ultimately caught. Who would have thought a little dog would be so brave. They are like kids in the snow! Now that he is back we have cleared all the snow away from the fence. Hopefully it never happens again. Thank you. 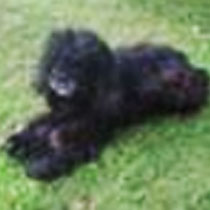