Lane is a deaf Border Collie who was just adopted out to a new family. He got spooked and broke free of his collar and took off. DFD came out to start the tracking process. As the tracking was taking place, another  family had seen a posting on the web. They had caught Lane in their town, but they lived 20 plus miles away! How he got there we will never know but we were thankful that he returned home safe and sound. A side note is that we were called back again two days later!  He had escaped, but this time he was caught very close to home. 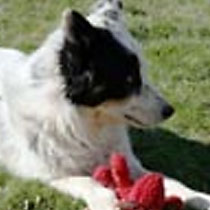