Lexi is not the nicest dog with strangers. She often tries to bite them, but somehow some thugs in a nearby neighborhood got their hands on her and were going to try and sell her. I live in Baltimore City. After 4 days and some rain I thought it would be impossible for a dog to help find Lexi. I am very happy to say I was wrong. I was given DFD’s name by our local shelter. They brought out Heidi who is good at doing concrete tracks. She scented up at my front door where Lexi went missing from and off we went.

Lexi had started to run around the blocks and everywhere we went the kids and adults said “Yes, we tried to get Lexi but she tried to bite us!”. Eventually the track led to a single row home.  When we got close, the people inside got nervous and started asking many questions. They then gave Lexi up. They had stolen her, ignored the signs, and were going to sell her to someone they knew. Thank goodness for Heidi, the big black scary looking dog!  I think they thought we were the police. Don’t I wish we were! Thank you DFD! 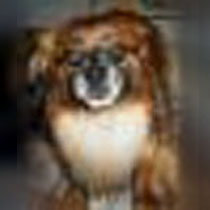