We’re going to try to lay this story out so it can be followed, as it is one of the most convoluted cases we’ve worked!

Magoo ran away and got lost in a state park. He was wearing his collar and tags. A man picks him up, calls the number but doesn’t leave a message. DFD brought out Anne and K9 Heidi. The phone number is called while there to hear the guy say he threw Magoo back into the woods. Yeah Right! The tracking path with the dog only showed a small path so it looked like the story was a lie.

We got the callers number and went to his house in Dundalk with the police. He denied it. We hung flyers up outside his house and his child calls stating that Magoo was in Dundalk. Strange! The guy then sells him to a prostitute in Brooklyn, MD. On Mothers Day, the prostitute is visiting her mom in Landsdowne and Magoo is lost again. A kind neighbor picks him up and calls the number on his tags. Criminals are stupid! Really… they left the original tags on.

While on the phone with us the prostitute assaults her and steals Magoo back out of her arms. Cops are called two times to come to the house with us. They would not give Magoo back. They were VERY VIOLENT! Then they send a family member to the good neighbors house and he threatens her for turning them in. Cops are called again. We then research the house to find out the mom’s name. In the process we find an obituary that lists all the kids. Researched their addresses and put flyers up all around their homes.

The prostitute apparently thinks it’s a funny situation and tells her friend about it… laughing. Her friend does not think it’s funny and calls us from a Craigslist post. At 10pm, we go with Baltimore City Police and Magoo’s owners. Baltimore City doesn’t play!!! They knocked that door so hard and for so long it sounded like it was going to break. The prostitute comes out and lies of course. The neighbors come out and says Magoo is there. A warrant was going to be issued to raid the house and just as all of this was to happen, out comes the prostitute’s boyfriend with Magoo and he gives him back. Now to show how STUPID criminals are……there was a $1000.00 reward for Magoo. They could have had the money but instead almost got arrested for stolen property.

I don’t think any other stolen dog case will top this one.

Special Thanks to all who helped with the search for Magoo’s in Ellicott City, MD 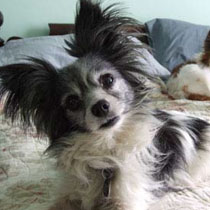