Despite several warnings to close the door behind him, my son’s friend leaves the front door open and Lulu escaped.

After many hours of searching the neighborhood and calling her name, there is simply no trace of her. Several days of brutally cold weather and we wonder if Lulu could survive such cold. After six days and out of options, the SPCA mentions that Dogs Finding Dogs might be an option. The idea of a dog finding a cat was incomprehensible to us but we are willing to give it a try. Christine contacted us promptly and we arrived on Saturday with Keelah, a shepadoodle. Keelah sniffs Lulu’s bedding and, with her nose glued to the ground, starts following Lulu’s scent in the direction she was last seen. We follow as Keelah bounds through several neighbors’ yards. The further away she gets, the weaker the scent. On several occasions, Keelah sticks her nose in the air apparently able to catch a scent of Lulu.

After 15 minutes, we enter a yard two houses away and Keelah clearly locks onto a strong scent. She sniffs, paws ground and tries to climb under the deck that only has a foot or so of clearance. We use flashlights to try and see if we can see Lulu. No luck. We again set off to where she was also supposedly sighted. Again, the trail goes cold. Christine feels strongly that we should return to neighbor’s yard where the scent was strongest. Again Keelah shows real interest in the small step under the deck. As I lay on the ground at the opposite end of the deck shining the flashlight, Christine wiggles a long stick under the deck to see if we can flush out whatever is under there. Finally, Lulu emerges and looks at the flashlight, meows and returns to her place of safety. At this point Keelah backs off and lets the human retrieve Lulu. We rip up two slats on the deck and lay a trail of treats to get Lulu within my grasp. A very thin and hungry kitty inches forward to where I’m able to grab her by the scruff of the neck and dump her in a waiting crate. Cat found! Keelah and Christine were simply amazing throughout our ordeal.

Dogs Finding Dogs has proven many friends and neighborhood skeptics wrong about the ability of a dog to find a cat and now they’re all eating crow. Thanks again to Keelah and Christine for reuniting us with Lulu! 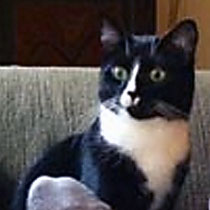