Oh my goodness! Thank you so much, Dogs Finding Dogs, for getting my dear Maltese Poodle back home safe and sound. I have never in my life had such a incredible exciting experience as when Heidi and Anne came out to look for my dog. We started on 29 in Columbia and with a sighting of my little dog being chased by a fox in the woods. Within LESS THAN 1 MINUTE, Heidi found my guy and he promptly said “Tag You’re It… and HAHA to You” as he took off. Well, my dog would sit in front of us. I would get low to the ground and do everything we could to call him over. A trap was not an possibility because I was not going to stop that night until I caught him. He is so little and would be fox food. My dog did this four times along the way. He ran from Route 29 straight up the waterline that lead to the parking lot on Route 70 at Enchanted Forest. This is where it got really crazy. We had grown men who stopped traffic and jumped out of their cars to block him off. One of the guys bit the dust, face first in the dirt. Then finally another fellow popped out of his car and leaned over just in time to grab his tail. And HA!  My boy was caught. This was about a two mile chase!  A nice taxi driver brought us and both dogs back to where we started. Now we all are going to go out and celebrate! Thank you for not giving up. You told me not to chase him but I just couldn’t help myself. Now I see why.  At least we got him in the end! 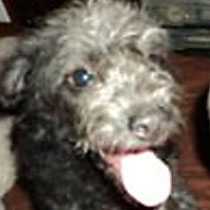