Max, what a beautiful long haired black cat. He was a gift from a friend. Max went out on the patio one night and was mistakenly forgotten about.three hours later Max was gone. He was tracked three times by Heidi and was finally discovered running into the nearby storm drain. After a lot of coaxing and dropping down of smelly cat food, Max came out one day only to continue is game of “Catch Me if You Can”. Several traps were set for him and after almost giving up a trap was replaced outside on the patio. In the middle of the night Max finally came home, got caught in the trap and back inside he now is with his sister! Hurray! It took almost three weeks of hard work to return Max safe and sound. 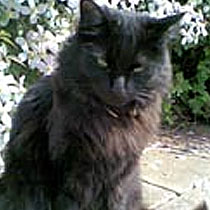