Last Thursday I asked my mom if she could watch Nate while I went to a conference. Nate had been to her house many times before and he runs with her dog Sadie. After returning from a walk, Nate slipped out the gate as she was closing it. Mom was frantic. She ran after him, but Nate was too fast and she quickly lost sight of him. Not knowing what to do, she googled online and found Find Toto (which was excellent). She then made flyers and began passing them out to everyone, but no one had seen Nate. The next day I contacted every rescue and shelter I could think of. A lady at the SPCA recommended Dogs Finding Dogs. I contacted them, and they turned out to be a godsend. These people brought out a trained K9 search and rescue dog, which promptly found Nate’s scent, and tracked Nate’s path into a path of woods. We didn’t find Nate that day, but the lady showed me how to set up scent trails and feeding stations which hopefully Nate would pick up on and we could lead him back towards my mom’s house. Over the next two days I set up trails, feeding stations, and even borrowed a trap. Within 24 hours neighbors started calling with sightings of Nate. He was following the scent trails! It got to the point where we could pinpoint the patch of woods that he was hiding in. When a phone call came from one of the neighbors that Nate was sitting in his usual patch of woods, I threw on my shoes and darted up the street. The sun was going down, but I could make out the shadow of a little dog. I was elated! I called to him and he came forward a bit, but he would not come out of the woods. If I stepped forward, he would run back. So I got an idea… I got up, turned my back to him and said “OK, time to go” and started walking out. And Nate started following me!!! When I got to my mom’s house I thought I opened the gate and said “come on Nate, lets go!” Sadie was standing in the driveway and Nate saw her and trotted inside. When I finally got a good look at him, he was really quite disgusting… he STUNK and he was covered with ticks and burrs. But I didn’t care. My dog was home! 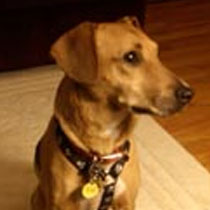