Olive, and his sister Martini, are the loves of my life. Last Thursday, Olive managed to slip out the front door unnoticed with his black fur. I searched the house high and low, then around the neighborhood in sheer panic. I recruited family members and friends to plaster the neighborhood with posters. I notified all the shelters and animal hospitals and checked listings of lost animals. Finally, I put up an ad in Craigslist and a nice lady named Anne responded saying that she thought she might be able to help me find him. When I saw Anne’s response, I immediately gave her a call. After only a 15 minute conversation, I felt completely empowered with Anne’s advice. She encouraged me to take a more active role in Olive’s search and reassured me that everything would be OK. I went out and crawled under decks and in bushes and sheds, and realized that Heidi was who I needed. I called Anne back and she spent even more time giving advice and encouragement and we arranged for her and Heidi to come by. They were able to narrow down a few homes where Olive had been recently, and that in itself gave me a lot of hope. Anne promised to return two days later so that we could use the snow that was about to fall as another tracking device. In the mean time, she gave me detailed instructions on what to do to find him- like getting a trap from the humane society. Well, needless to say, I canceled Anne’s second visit because last night, Olive wondered right smack into the trap! I am so grateful to have him back!! I am also equally grateful to have Anne’s help! Without Dogs Finding Dogs, I think that I would still be searching for Olive, and Martini would sill be pacing around the house missing her brother. 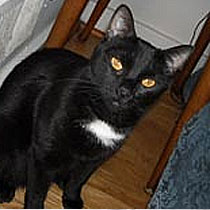