Oliver is a very scared rescued beagle. In the eight weeks after adoption, he has escaped two times! The first time he did not get very far but the second time the trackers had to be called in. DFD came out immediately to find Oliver. The track went into the evening hours and after dark. Heidi and Lee were the dogs used and Heidi during the track rounded a corner of a house and came nose to nose with little scared Oliver. Of course Oliver took off again and ran thru the neighborhood and was subsequently found in another back yard. It seems that during the track someone managed to grab his leash and plunk him into a yard with a closed fence. They took his leash off so he would not get hurt. Oliver was found safe and sound and is back home to rehabilitated. Now Oliver will be sporting a GPS collar! He is just way too fast!!! 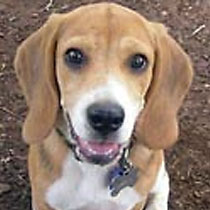