Steven is a 15lb, 11 year old indoor/outdoor cat who has rarely missed a meal, much less a night at home. One Monday night as we arrived home from work the other two family cats came running up the sidewalk in anticipation of dinner, but Steven did not appear. Five nights passed without sight or sound of Steven. So, we called Dogs Finding Dogs in hopes to locate Steven.

On day six, Christine and Keelah (the search dog) came out to Steven’s home in downtown Annapolis to begin a search and rescue operation: Operation Steven. The Operation Steven search lasted four hours and included a sweep of many square blocks. One area really caused Keelah to transform her mouth into a suction cup/hoover vacuum cleaner as she ran along the lattice under a huge wrap-around porch. Using flashlights, the area under the porch was scanned for Steven. Keelah would push her way in during the porch scan, getting in the way with her determination and persistence. Still, no Steven. Eventually Operation Steven ended for the day with Christine offering us advice to continue to monitor the hot spots, preferably after dark and late at night.

At 11pm later that same evening we were walking home from dinner at a friend’s house, which happened to be one block further than the house with the huge wrap-around porch, and we stopped to pull out our tuna rescue kit (smelly tuna in a Ziploc bag filled with water). The objective was going to be to make a trail from the hot spot region all the way home in case Steven was around. While standing next to the house, we pinched a small hole in the tuna rescue kit bag and before the first drop hit the ground we heard a high pitched meow/shriek come from under the porch. We immediately ran to the porch, yanked back the lattice, and out popped Steven’s head. There he was!  He had been stuck for 6 days underneath the porch of a house about 8 blocks away. We were overjoyed. Steven was so dirty, skinny, hungry, and had an injured foot but he was happy to be carried home.

We can’t thank Christine and Keelah enough for their tireless efforts in pinpointing Steven’s location. It was a surreal experience!  If we were doubted before, we are advocates now. Dogs Finding Dogs is an incredible organization. Thank you!! 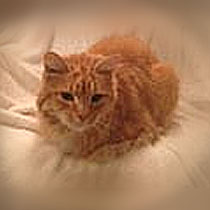