Petey is our 10 year old, large, indoor Tabby cat. Last Friday night my teenage son left the back door open and Petey decided he wanted to go on Spring Break. My husband and I were out of town and didn’t realize the situation until Saturday night, a full 24 hours after Petey’s escape. We live in an area with some woods and fairly large lots. Also we have foxes, raccoons, and other wildlife around that could threaten a not too bright indoor cat! We posted flyers within a several mile radius of the house, spoke to neighbors, and advertised on Craig’s List. Then we just hoped. On Monday, we received an e-mail and a call from Anne. Anne told me about her service and also gave me lots of good advice for finding our cat. After several hours thought, we hired Anne to come do a search for Petey. Anne and Heidi came the following day and Heidi did her thing after sniffing Petey’s climber. Heidi is quite an impressive searcher and picked up Petey’s sent immediately. Several houses away, Heidi zeroed in on a rundown gardener’s shed. The door was closed but had rotted out holes in the base. When we opened it, there was Pete, “fat, dumb, and happy” curled up in the leaves. To make a long and happy story short, we captured him, loaded him into his carrier and brought him home. Many thanks to Anne and Heidi! 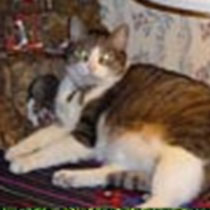