When Pickles went missing I told anyone and everyone my tale of woe, and after a couple of days a friend at work told me about Dogs Finding Dogs. I thought this was the best idea I had ever heard, and called Anne immediately. Yoshy and Lee came out with Anne to search for Pickles the next day. Pickles was on the move, and hard to pin down. Throughout the next week and a half Anne and Janel helped me with useful advice on how to track him down, and Heidi worked to sniff out any evidence. One night Anne brought me a motion detector camera to find out what was happening at my house at night, and Heidi picked up Pickles’ scent right on my front porch! This re-energized my hope, and helped me focus my energy on the porch, baiting it with lots of food, the flour to track his paw prints and an open window in case he decided to come home. I spread the outside of the house with his stinky litter and lots of smelly wet cat food. After several days of trial and error with the camera, I caught Pickles’ return on film. Everyone at Dogs Finding Dogs not only helped me search for my furry friend, but helped me find humor in the situation. My heartfelt thanks goes to Anne and everyone at Dogs Finding Dogs. Without them, I might have given up hope.

P.S. from DFD: Pickles also was on the radio and his mom Caroline is known by almost everyone in Maryland. We got calls from all over asking if we were looking for Pickles because people knew of him. If you look at his pictures you can see that he refused to take the bait and even tip toed into the window! 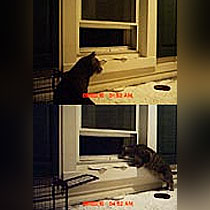