Thank you DFD! You ROCK! My name is Ron. I am a musician in a local Baltimore Rock band. My dog Harley got away from my roommate while I was at work. I could not find him. He vanished! Dogs Finding Dogs came out for us the following day. The tracking dog ran out Harley’s path and then it abruptly stopped on a yard of the local VFW hall. This was about 1 block away. But, while we were tracking there the dog stopped at a house and would not leave. It was really insistent! These people hid in the house until we left and then started to follow us in their car. They then started a confrontation with us as to why we were at their house. It was as if they had something to hide, and they sure did!!!!! Anne told us that they know something and probably had my dog. She told me to branch out further and hit the Harford County shelter with a report. I live in Baltimore County. She said that people will dump the dogs a little further out to avoid being caught. The very day Harford County called and they had Harley. What the neighbors didn’t think of was that the shelter makes you show your drivers license when you drop off a dog. That is how I found out the the tracking dog was right. They got scared and the morning we got the call from the shelter they had dropped him off. Wow! Rock on DFD! We owe you a concert. 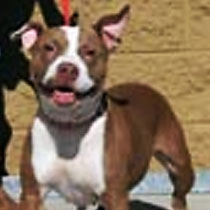