Munchie was lost by my elderly in-laws even after I told them to keep him inside!  My husband and I live in NY and were visiting the in-laws here in MD. While we were out with friends they let the dog outside to go to the bathroom. I had put papers down for her inside. Once she was outside she took off and my father in law could not keep up with her. His neighbor referred us to DFD. I have to say I was very stressed when I called them. My husband drove back down to MD to meet with them to search. While out they found where Munchie was. She was in the poison ivy filled woods, behind a neighbor’s house. There was a fox there that kept chasing Munchie so it was so scary and we had to catch her. Once we knew where she was we set up feeding stations and food paths that led back to my in-laws. The next morning my father in law saw her in the driveway but he did not tell us until later that afternoon. So DFD came back again, verified that she was still there. We did not let the search dog go into the woods after her because we did not want to chase her off. DFD was on the phone with my husband seems like all night into the early morning guiding him on what to do outside. They told him at one point to walk down the path that the dog said Munchie was using. And there was Munchie! He got her to come to him and he came home to NY. I have never been so grateful for the help we received. The only sad thing is that everyone got the worst case of poison ivy. My gratitude will always be to DFD. 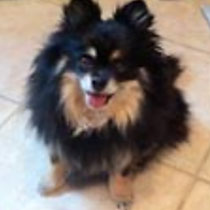